After his studies in Philosophy and Cultural Sciences, Gerd Van Looy cumulated a rich and varied series of professional adventures in the arts. Developing some personal projects in theatre, scenography and music, he moved from a first professional experience in deSingel (Antwerp) to Les ballets C de la B in 1996. It was the moment of the international breakthrough of this collective with Alain Platel, Christine De Smedt, Hans Van den Broeck and more.

From 2000 on Gerd was working on a project basis, as production manager or general coordinator for a.o. the Cultural Capital of Europe Bruges 2002; Canvascollectie (a large scale participative project on visual art, developed with the five flemish museums of contemporary art and the Flemish television station); the film festivals of Ghent and Brussels; or dance companies like Peeping Tom or Ultima Vez/Wim Vandekeybus.

From 2008 until his start with ICTUS he worked in BOZAR as an artistic coordinator and manager of transversal and interdisciplinary projects. 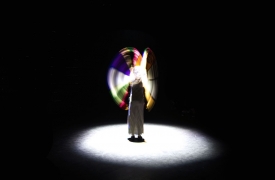 SPEECH FOR THE ICTUS 25TH ANNIVERSARY, BY Gerd Van Looy