Marie Goudot (b. 1978, France) studied dance at the Rudra Béjart School in Lausanne. She joined the Béjart Ballet Lausanne in 1998 and left in 2000 to pursue a freelance career. She was introduced to contemporary and contact dance over a period of several years while working with Russell Maliphant in London, and later with the Alias Company in Geneva. In 2005 she joined Michaël Pomero and Julien Monty to found the Loge 22 collective, a space for choreographic research and collective creations. Loge 22 has created a dozen or so dance productions to date, films and choreographies included. Loge 22 is a cofounder of Europe’s SPIDER Festival, staging events in Slovenia, Croatia, Greece, France, and Belgium. In 2010 Goudot joined Rosas for Cesena and Vortex Temporum, and also took part in Work/Travail/Arbeid, Mitten wir im Leben sind/Bach6Cellosuiten, The Six Brandenburg Concertos and Così fan tutte. 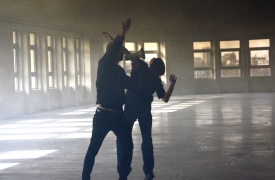